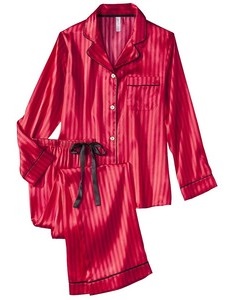 Forget comfort food.  I’m all about comfort clothing, better known as loungewear.  Which any fashionista can tell you is just a fancy name for pajamas.  Pima cotton, microfiber, silk, flannel – the season often dictates the fabric – but every gal has her favorite.

An old t-shirt and jeans may be the correct attire if you’re puttering around the house on a typical Saturday, re-potting a plant or rearranging your bookshelves.  But to truly luxuriate, and sleep late enough some Saturday morning to call your first meal of the day brunch, after which you sit on your sofa reading a magazine, you best be wearing your favorite striped, paisley, or polka dot PJ’s and matching spa socks.

Me, I can’t wait for the weekend to wrap myself in my comfiest, coziest fashions.  Seriously – I literally cannot wait.  As soon as I get home at night, I slip into my loungewear.  And when I dream of working from home, it’s not because of the commute.  It’s because I’d be wearing my loungewear all the time.

So for the vast majority of us who spend our days in constricting garments and high heels, I encourage you to be kind to yourself.  Loungewear is an affordable luxury.  Put on your fancy pants and matching top and pamper yourself.  You deserve it, girl.

Last Sunday was the scene of a Boston Tea Party, of sorts.  Okay, it wasn’t exactly a party since there were only three of us.  And technically, we were southwest of Boston.  But there was tea involved.

With Christmas only a week away, we were exhausted, what with all the shopping, the cooking, the cards… and we needed to take a break.  Which meant taking tea.

We met up in Walpole, Massachusetts, at a hidden gem called “Fancy That.” This unique tea room offers a wide variety of tea, delicious scones, tea sandwiches, and sweets, in an atmosphere that makes you want to trade in your tunic sweater, leggings, and boots for a costume straight out of Downton Abbey.  We truly felt as if we’d been transported to another time and place.

For two luxurious hours, the three of us harried gals sat sipping tea, (I chose a jasmine earl grey called “Buckingham Palace Garden Party Tea”) nibbling on lady-like sandwiches with the crusts cut off, and delicate confections.  We chatted and laughed and recharged our batteries.

My usual remedy for being overbooked, overworked, and overwhelmed is to drink more coffee which only speeds my heart rate as I rush around trying to do just about everything faster.  Who knew I could find such serenity at the bottom of a tea cup?

The next time you’re feeling the pressure, take a few minutes, and take tea! 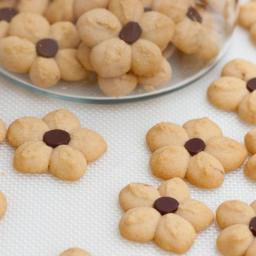 “Gotta stop at the market on my way home and pick up some more butter,” my officemate announced.  “The cookie factory is open for business.”

She was in the midst of a chopped pecan, chocolate chip, sanding sugar, pre-Christmas baking frenzy.  I’ve been there myself many times.  But I’m sitting it out this year.  Because in a little over a week, I’ll be home for Christmas, enjoying my mother’s sweet and delicate holiday treats.

Every year, about a week before Christmas, my mother (picture an Italian-American Martha Stewart) puts on her apron and her favorite Christmas music (cue up Dean Martin singing “Baby It’s Cold Outside”) and embarks on a baking marathon known in our family as “Cookie Day.”

Her butter cookies are made with a cookie press and decorated with chocolate or brightly colored sugar.  Her almond crescents are rolled in confectioner’s sugar while they’re still hot.  The thumbprint raspberry linzers and Italian sesame seed cookies are especially labor intensive.  And the pizzelle are painstakingly made one at a time on the stovetop.

As a teenager, I loved assisting her in this holiday tradition as she prepared the various types of dough, then decorated, and baked the cookies.  Once we got into a rhythm, there was no stopping us.  The moment a tray came out of the oven, the next one went in.  Carefully, the oven-hot cookies were set on the parchment paper lined kitchen table to properly cool. When we ran out of space on the kitchen table, I got the idea of using the ironing board, so we lined it with parchment paper, and placed the overflow cookies there.

Since he retired, my dad helps out on Cookie Day.  At least he calls it helping.  But my mother’s on to him.  She makes him whistle, so he can’t sample too many of the homemade Christmas treats.

When you live alone, you can do whatever you want, whenever you want.  For instance, you have complete 24/7 control of the remote.  You always get to eat the last piece of cake.  And you can decorate your bathroom red – which I did.

My friends who are married are limited when it comes to home decor.  They paint their walls “mushroom” and choose stripes and solids for drapes and upholstery.  I can use colors and patterns no man would ever agree to have in his home.

I inherited a kitschy 1970’s styled bathroom when I bought my condo.  Picture a man cave.  Now picture the polar opposite.  The tub, toilet, sink, and even the floor tiles – pink.  Calamine lotion pink.  But since the fixtures were in such good condition, instead of gutting the whole thing, I decided to keep the pink.  Remember the number one rule of living alone: you can do whatever you want.

That’s when those iconic red poppies came to mind.

“This is either going to be the most brilliant thing I’ve ever done,” I confided to the Marimekko salesgirl, “or else it’s gonna clash so badly that it’ll make me dizzy.”  She assured me I could return all of it: the shower curtain, the matching storage tins, the accent towels, if I passed out.  Once I knew I was on to something, I bought an armful of solid red towels and a lipstick-colored soap dish, tissue box, and waste basket set.  In the end, the pink ran and hid under all that red.

As a single woman home owner, I took on a big responsibility.  But with that responsibility came great freedom.   Recently, I looked with new eyes at the kitchen counter tops I also inherited.  Then I took a trip to that big home improvement store just to look around.

After batting around a few impersonal emails with an on-line dating prospect, the coffee date is what you do.  It may seem old-fashioned, but I miss the blind date.  There you had a genuine connection.  A good friend would fix you up with her husband’s old college roommate.  Two things were guaranteed: someone who knows you and knows him thought you might just hit it off – and he’s not a sociopath.  Even if you didn’t find your soulmate, it was safe to let your guard down, and maybe even enjoy yourself.  Not so with the coffee date.

We met after work at Starbuck’s.  From our emailing, I knew he was a financial analyst and although I didn’t know his last name, that he was Italian-American like me.  I was hoping for a Renaissance man…

My date was tall and attractive in his charcoal gray suit.  And he was all business.  After we sat down with our coffee, what I can only describe as my interview commenced:

“So you mentioned that you like to cook,” he began.

“You make your own tomato sauce?” he prompted me.

Then he fired off a series of follow-up questions:

“What do you put in it?  Do you slow cook it?  How do you make your eggplant parm?  You do make eggplant parm, don’t you?  And stuffed artichokes?  What about steak pizzaiola?”

I was on a job interview all right, and the job under consideration was wife.  Turning the tables was tempting.

“How are you with plumbing and electrical work?  Can you unclog a sink?  Install a ceiling fan?  Do you do your own house painting?”  I could ask.

But I didn’t.  I knew he wouldn’t get it.  Instead I just smiled and sipped my latte.