We had our first significant snow storm a couple of weekends ago.   When my brother and I finally ventured outside, shovels in hand, and peered at all the chairs scattered in the street, he muttered, “here we go again.”

If you read this re-post from March 2018, you’ll know what he meant.

My old roommate texted me four snowflake emojis, and my friend called from Florida when they heard about the latest Nor’easter that dumped 20 inches of snow on Boston.   A snow emergency was declared and a street parking ban went into effect.  When the parking ban gets lifted, what happens next may sound crazy to anyone who’s not from Boston.  Or Chicago, Philly, or Pittsburgh.  This phenomenon, depending where you live, is known as “space saving,”  “dibbs,” or “chair parking.”

Most everyone does it in Beantown because we believe that when you spend several back-breaking hours shoveling out not only the snow that fell, but the surplus snow the plows have dumped in front of your house, you’ve earned this spot – that you can pahk ya cah – and Gawd help the person who tries to pahk there the moment you drive away.

The unofficial rule to this decades-old practice is that once you shovel out your spot, you have exclusivity to the spot until all the snow has melted.  Which could take a while.  This practice is so sacred that some people have been known to leave threatening notes warning that whoever takes their hard-won, shoveled-out parking spot risks bodily harm, and mysterious damage to their vehicle.  However, New Englanders are generally polite so the more accepted way of laying claim to the parking space is by putting a chair in the empty spot.  Any chair will do – a folding chair, a beach chair, a bar stool.   Over the years, I’ve seen some pretty funny stuff: an old toilet bowl, an anchored down Barbie Dream Car, and a plaster bust of Elvis.

I now live on a street that vehemently adheres to space saving and my brother and I are facing a dilemma.  We don’t have a chair we’re willing to sacrifice to the elements and place in front of our house.  Do we go to the nearest discount department store to buy a cheap, dispensable chair?  Or do we put something more unorthodox in front of our house as a space saver?  We have plenty of rubble from my on-going house renovation.  A discarded kitchen cabinet?  The old stove?  Or perhaps a slab of counter top with the sink still attached?  My brother believes in the “go big or go home” approach, figuring the heavier the item, the greater the chance no one will move it and park in front of our house.

In the end, we’ve decided to follow the “when in Rome” adage and  we’re going with the chair. 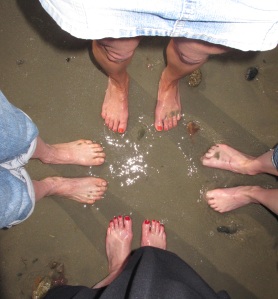 Whenever I speak about them, I don’t call them my friends.  Our relationship is special and it needs a qualifier to describe who they are and what they mean to me.  So I refer to them as my old roommates because living together made us closer than friends, and more like family.  Even though it’s been many years since we last lived together, this still holds true.

We met as grad students at Emerson College.  All three of us came from the New York-New Jersey area and were new to Boston.  The close quarters of grad school housing only helped our friendship to flourish.  At the end of the year, another New Yorker joined us, and the four of us moved off-campus.  Our new digs, a railroad-style apartment, was much larger, but in need of a major face-lift.  As young women living in the city, we didn’t mind residing in a self-proclaimed student slum.  We were too busy having fun.

Graduations and jobs inevitably ended our time of living together.  My roommates left Massachusetts – for New York, New Jersey, and New Mexico, while I found a cute studio apartment and stayed in Boston.  Although we often go for long periods of time without seeing one another, we stay in close contact.

Last winter, New York was the first of the roommates to visit me in my new home, arriving only a few weeks after I’d moved in.  She could see beyond the bare walls and the pile of cartons in every room, to what it would become with time.  And her enthusiasm for me was palpable.

In early November, New Jersey and New Mexico came to town for a conference and stayed with me for a couple of nights.  My first over-night guests since the big home reno was completed.  This symbolism was not lost on me.

We talk, we text.  And when I’m lucky enough to spend time with any of these three amazing women, we don’t miss a beat.  Time and age do not matter.  We feel as if we’ve never lived apart.  I’m sure we always will.

Eat healthy, lose weight, join a gym, get more sleep…  It’s easy to make New Year’s resolutions but most people have a hard time keeping them.  For me, the key to keeping New Year’s resolutions is to be honest with yourself by setting realistic goals and adopting behaviors you can live with.  In that spirit, I’d like to share my plan for the new year.

Diet:  My three fruits per day will be two raisins and a glass of wine.  Cutting carbs is never easy, so rather than set myself up for failure, I won’t even attempt this.  However, when choosing brown food over white food, I will include two servings of chocolate (one dark and one milk). This way, the milk chocolate can double as one of my two dairy servings.  The other, a cup of ice cream (any flavor).  To reduce meat intake, I’ll cut bacon to no more than 3 slices with my weekend breakfast or brunch.  And a daily glass of V-8 to wash down a multi-vitamin should cover my veggies.

Weight:  Some people weigh themselves every morning, but I’ve always found once a week to be sufficient.  Funny thing: back in October, my scale broke.  I haven’t bought a new one and I’m not sure I need to because I really don’t miss this weekly ritual.

Exercise:  The gym is conveniently located a few doors down from the drug store and supermarket in the strip mall nearest home so I can easily go to the gym a few times per week.  If I park at the far end of the parking lot, and walk, I don’t even have to actually go into the gym.  I can just go past it on my way to the market where I’ll be buying all of my healthy food.

Sleep:  The sleep experts advise getting up and going to bed at the same time each day.  This would mean getting up at 6 AM on Saturday and Sunday.  Seriously?  What if I don’t set my alarm clock over the weekend and simply leave my rise-and-shine time up to fate?  I do resolve to go to bed earlier.  My goal is to turn out the lights at 1 o’clock.  After all, you can’t get much earlier in the day than 1:00 AM.

This should all work for me – hope it’s helpful for you.  Happy New Year!