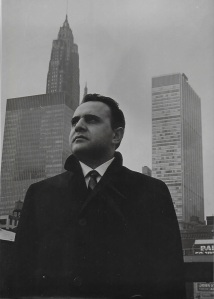 Back in the day, my father was a G-rated version of Don Draper – one of the original “ad men” of the 1960’s.  For most of his career, he worked in the advertising department at NBC.  As a child, I didn’t understand what he did, but I surmised it was important because he worked in Rockefeller Center and had a view of the skating rink from his office windows.

Years later, I understood just what his job entailed.  His department was responsible for all the print advertising for the network.  The graphic artists and copywriters created ads and he produced them, by working closely with engravers and typesetters.  He then bought space in the various newspapers and magazines that would run the ads.  Faced with the pressure of constant deadlines, he often schmoozed and negotiated with the printers, all the while cajoling the artists to get them to turn their work in on time.  My father worked long hours.  And he suffered from migraines.

My father’s immigrant father owned a small, independent, neighborhood fruit and vegetable store in Queens, New York.  My grandfather spent his life lifting and carrying crates.  Despite how tired my father must have been from his long work week at NBC, he sometimes helped out at the family store on Saturdays, and I doubt he and my grandfather ever talked to each other about work.  I’m not sure if my grandfather understood the power of the media or saw the work my father did as meaningful.

When my father retired, he traded in his suit and briefcase for a set of golf clubs.  These days, he goes out to breakfast with the ROMEOS (Retired Old Men Eating Out), wearing the Life is Good baseball cap I gave him a few years ago.  He thought the slogan was a reference to his retirement.  But it was also meant to acknowledge how hard he worked to give our family a good life. 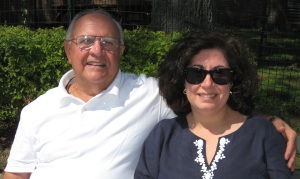