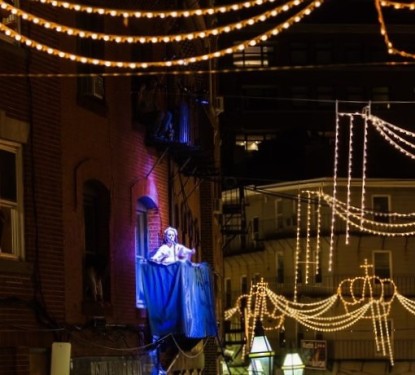 Last August, I wrote about the annual Feast of St. Anthony that takes place in Boston’s Italian North End.  Called “the Feast of All Feasts,” it’s the culmination of the summer season’s celebrations of faith, Italian culture, and food – and the biggest block party you could ever imagine.  However, this year, on the Sunday night prior to the St. Anthony Feast, I ventured down to North and Fleet Streets for the Fisherman’s Feast because an Italian-American friend promised me a spectacle “unlike anything you’ve ever seen!”  She wasn’t kidding.

A large crowd gathered at dusk, awaiting the arrival of the statue of the Madonna and the little angels who pray to her.  Trumpets played and everyone cheered when the statue of the Madonna approached. Spotlights shone on two skirted third-story balconies, directly across from one another.  A little girl dressed as an angel appeared on one of the balconies and began praying in Sicilian.  Soon, the second little angel appeared on the opposite balcony.  With the help of some elaborate cables, she began her descent until she was lowered down to greet the statue.  Still suspended, she also prayed to the Madonna.  The crowd went wild cheering and throwing confetti. 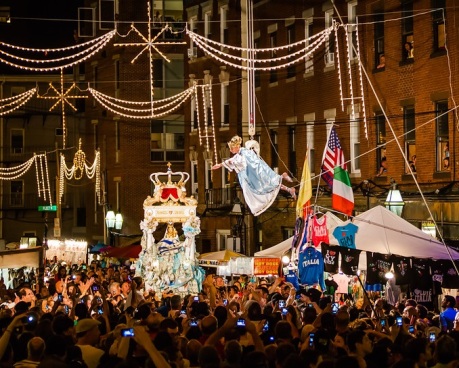 But what was truly remarkable about this scene was not that these little girls had memorized a rather lengthy prayer in Italian, or how the many hands holding the cables did everything with such care and precision, or even how beautiful the statue was.  It was extraordinary to witness the devotion of so many people, and the great sense of community that devotion had inspired.  Younger people made spaces on the crowded street and sidewalk for older folks, as folding chairs seemingly appeared as if by magic for these elders.  Adults lifted children up – not even their own children – so the youngsters could get a better look.  And despite the lack of a significant police presence, when the ceremony was over, the thousand-plus crowd disbursed in a respectful and organized fashion.  I’m sure the Madonna del Sorrorso was smiling down on all of us.

2 thoughts on “Flight of the Angel”