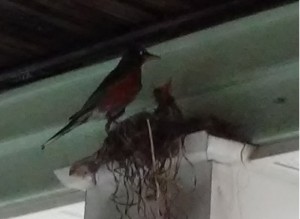 Last month, I told a story about the robin’s nest on my front porch.  An expectant robin redbreast was waiting for her babies to hatch, and I, watching from my living room window, waited right along with her.  Initially, she was skittish and flew away whenever I approached.  Later, she barely budged from the nest.  I knew the baby birds would be coming soon.

What I hadn’t expected, but was delighted to see, was the arrival of a male robin in that crowded little nest.  He was tall and slim, his breast a more vivid shade of red than that of the female robin.  As she sat with the eggs, he flew back and forth, always returning with worms – yes worms.

I frequently checked on the birds and soon found the female robin still as can be, alone in the nest.  Or so I thought.  Much to my delight, I spotted two tiny hairless heads peering out of the nest.  The babies had hatched!  I imagined that perhaps one might be a girl, the other a boy.

The next day, the female robin was gone.  Poor thing, she must have been exhausted.  Was she at the bird spa, getting a massage and gorging herself on worms?  Now the male robin had taken her place, carefully tending to his offsprings.  I remained transfixed watching as the dad robin carefully placed a worm into the outstretched beak of one of the babies.  He was a good provider.  As he continued to feed the babies, I tried in vain to take a good picture of this amazing paternal display but it was not such an easy thing to capture.  It seemed no coincidence to me that the dad had arrived, had stepped in as caregiver to the fragile baby birds, just in time for Father’s Day.

A friend who knows a great deal about birds described what would happen when the baby birds were ready to fly.  They would step out of the nest and on to the solid wooden ledge and flap their wings.  Flap, flap, flap, but they would hesitate to take the plunge.  They would continue to do this, in the same way that a beginner swimmer stands by the edge of the pool. Then, when the birds felt ready, they would flap, flap, flap and take off into flight.  I couldn’t wait to witness this.

The nest has been empty for several days now.  No mother, no father, no babies.  It would appear they’ve gotten out of Dodge.

Even though I didn’t get to see the babies fly for the first time, I know they did.  Because when a father provides for his daughter and son, like my dad did for our family, the kids grow up and go out on their own.  The healthy ones fly out of the nest.

To all the great dads – and especially to my dad – Happy Father’s Day.